By the 1960's the scope of church activities made it desirable to have parish functions (church, parish hall, office, thrift shop) in one location. The cornerstone was laid in August 1964 on land purchased in 1960 and the building dedicated the following May. 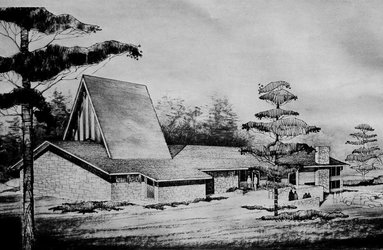 St. Andrew’s was designed by Carter & Woodruff of Nashua.  Their concern was to create a building which did not overpower the individual while maintaining its purpose as a  place of worship.

The architects chose to utilize New Hampshire materials, incorporating them in a modern building that nevertheless respected elements of traditional Episcopal church and New England secular design.   Episcopal tradition is reflected in the use of field stone around the sanctuary portion of the building.  Clapboards, the exterior material of the parish hall end, are the traditional material of New England houses and churches.

A clear visual distinction was desired between the church end and the secular parts of the single building.  The steep gable with a lantern window marks the church portion; the lower roof covered the rest of the structure.  The original main entrance on the north side “featured an open porch for exchanging salutations after the service” according to the 1966 Granite State Architect magazine. The simple roof line of the original was lost in the 1991 addition as can be seen in the photographs from 1966 on the left and 2016 on the right.
interior design
addition to st. andrew's  1991
Despite care with many aspects, the original design lacked essential facilities on the main floor.  In 1991 an addition provided new space for offices and toilets on the Gould Road side, and reconfigured both entrances with covered porticos.
photographs  1966 and 2016
Old Saint Andrew’s, 1766 King Hill Road